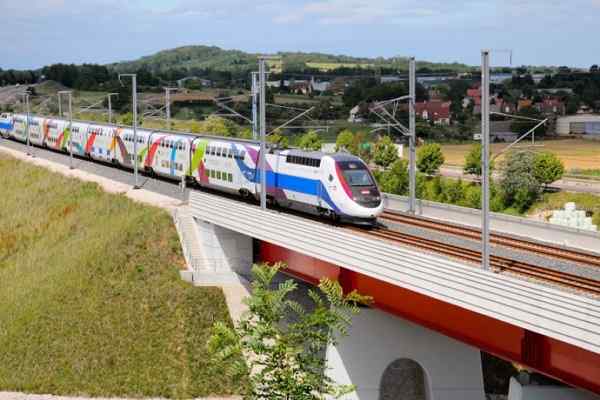 Thailand is a pretty developed country and is one of the biggest charmers for tourists from all around the world.

The country is very much famous for its exotic locations, natural sceneries, beaches, infrastructure, and its transport system, etc.

One of the common transport modes for tourists here includes traveling on bullet trains from one city to another and reaching their destination in a very short period of time.

This is why the Thailand government is trying to cater to its people and the tourists with more and more railway tracks in order to help them to reach several destinations without spending much on flights and private cars.

This railway system also helps to give a boost to the economy and aids to reduce the traffic and pollution on roads by urging more and more people to travel on a train rather than going on their separate cars.

Unlike the earlier times when you could travel from Bangkok to Pattaya by bus, a car, or a flight but not by train, now, after years of much debate and delays, this new railway is finally happening.

Just like many other projects that are under construction, another main project that got recently approved is the train to Pattaya, which is going to turn out to be a big change for Thailand.

One of the most exciting parts about this news is that the railway track or the bullet train from Bangkok to Pattaya is very much expected to be inaugurated this year in 2021.

This huge project is going to replace Bangkok’s 103-year-old Hualamphong Station, which will turn out to be a huge new train hub.

This railway system in the city’s Bang sue district will certainly be able to cater to passengers in a great manner by using both country’s existing train network that is upgraded from single to dual track and the HSR technology.

Regarding this matter, a conglomerate was led by Thailand’s CP Group on October 24, 2019, which signed a contract with the State Railway of Thailand (SRT).

This contract was basically started for the construction of an HSR line that would link Bangkok’s two main airports Don Mueang and Suvarnabhumi, as well as to the three eastern states of Thailand.

This railway line will operate in addition to the existing Airport Rail Link as an elevated train that connects Bangkok’s metro system to Suvarnabhumi.

All the way from Bangkok to Pattaya

This railway line begins from Don Mueang, which then passes through Bang Sue. One of its stops includes Makkasan, located in central Bangkok. The train proceeds to Chachoengsao, then to Chonburi, Sriracha, and then finally to Pattaya.

Pattaya is one of the major tourist destinations that is located 75 miles or 120 kilometers south of Bangkok which is on the Gulf of Thailand.

This 137-mile railway line will certainly end at U-Tapao Airport, which is located outside of Pattaya in the Rayong province.

With the help of this railway system, the Thailand government is planning to move around 10% of flights from Bangkok to a redesigned U-Tapao.

This plan is designed in order to ease congestion at Suvarnabhumi and Don Mueng.

A feasibility study on the railway network for Pattay suggests that this track is nearly complete, and it will be submitted to the council of the city and the cabinet for consideration.

As the designs for the routes and network are currently being looked at, the deputy mayor Pattaya Kiattisak Sriwomgchai said that the city would want to keep the appropriation of the land to a minimum.

The green line of the railway network will certainly connect the city’s main train station to the proposed high-speed rail line.

The first track from 2020-2026 will certainly map out the start of the construction of the Green and Purple routes and the path.

The second phase of this railway system will start from 2027-2031, which will include completing the construction of the Purple Line that is going to run from the Nong Prue municipality to Muang Pattaya 8 School.

The third and final phase of this railway network will start from 2027-2031, which will certainly involve constructing the Red Line that is going to pass along Jomtien Sai 2 Road, Pattaya Sai 2 Road, as well as Dolphin Circle.

These electric monorail tracks are going to be constructed along an elevated reinforced concrete beam for the railway system.

This monorail project is one of the major parts of the Eastern Economic corridor Committee’s plan in order to develop the three eastern provinces of Chachoengsao, Rayong, and Chon Buri.

In 2019, the Thai government had signed a contract worth US$7.4 billion (THB224.5 bn) with a consortium led by conglomerate Charoen Pokaphand Group to commence construction of a 220-km long high-speed rail network to connect Suvarnbhumi Airport with Don Mueang International Airport and U-Tapao International Airport.