Ahmedabad Metro all sets to open for public from March 4 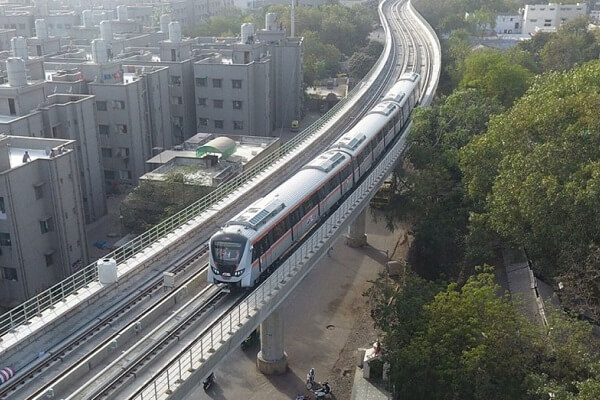 Ahmedabad (Urban Transport News): The Gujarat Metro Rail Corporation (GMRC) is all set to launch the operational service of the Metro rail in the Ahmedabad city. According to the information shared by Gujarat Deputy Chief Minister Nitin Patel, Prime Minister Narendra Modi will flag off the Ahmedabad Metro rail during his visit to the state on March 4.

This information was shared during the Question Hour before presenting the vote on account for the year 2019-20 in the Gujarat Assembly. "Prime minister Narendra Modi will flag off the Metro rail between the 6.5 km stretch from Vastral to Apparel park on March 4," the deputy CM Patel announced. This stretch is a part of the project's 21.16 km long East-West corridor which covers the line from Thaltej to Vastral village. "The Metro rail is ready. Trial runs are going on in the priority stretch.

The Research Designs & Standards Organisation (RDSO) has also completed its inspection," said GMRC managing director IP Gautam. However, he declined to divulge the dates for commercial launch of the Ahmedabad Metro rail services. Gujarat Chief Minister Vijay Rupani said in a written reply in the state assembly on Tuesday that construction work of phase 1 of Ahmedabad Metro rail project is going on, and it is planned to be completed by December 2020. This would include the entire East-West corridor, and also the 18.87 km long North-South corridor from APMC to Motera Stadium.

The cost of phase 1 is estimated at Rs10,733 crores. "As of December 2018, Rs2,987.91 crore were spent on the project in the last two years," Rupani said. Recently the central government has approved the detailed project report (DPR) for phase 2 of the Ahmedabad Metro rail project. In the second phase, the Ahmedabad Metro rail network would be expanded from Motera Stadium to Mahatma Mandir, and also cover GNLU-PDPU-GIFT City. T

he length of phase 2 metro network would be 28.26 km long. Sources said that the plan to connect Ahmedabad airport with Metro rail in phase 2 had been dropped due to difficulties in acquiring land, owing to the presence of Defence area in the vicinity of the Ahmedabad airport, were among the reasons for the decision also.