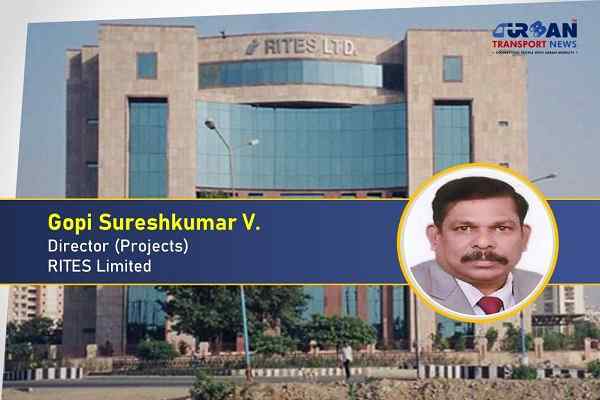 Gurugram, India (Urban Transport News): Gopi Sureshkumar Varadarajan, who is serving as Director (Projects) has been given additional charge of Chairman and Managing Director (CMD) of Rail India Technical and Economic Services (RITES) Limited today due to the superannuation of Rajeev Mehrotra with effect from June 30, 2021.

"We're pleased to announce that Sh. Gopi Sureshkumar Varadarajan, Director (Projects), has been entrusted with the additional charge of CMD at RITES Ltd.," said the press statement issued by the company.

He was also Regional Head to conduct business affairs of the company activity for the Southern Region and Sri Lanka which involved marketing & execution of infrastructure projects such as ports, water supply dams, industrial and irrigation projects.

He also served for 26 years in IRCON International Limited in various capacities and executed prestigious infrastructure projects related to railways, highways, flyovers. bridges, ROBs in different parts of India and overseas such as Nepal & Bangladesh. During his stint in IRCON, he was awarded twice in the years 1998 & 2007 for exemplary achievement the Hon'ble Minister of Railways Award.

Rajeev Mehrotra was appointed as CMD of RITES Limited on September 1, 2011. In November 2017, the appointment committee of the Cabinet had approved his extension from October 11, 2017 to June 30, 2021.