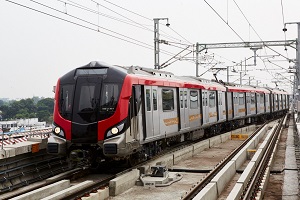 Lucknow (Urban Transport News): The Lucknow Metro Rail Corporation (LMRC) is all set to open the entire section of the North-South corridor (phase 1-A). AK Jain, Commissioner Metro Rail Safety (CMRS) along with his team today concluded the 3-day inspection of Lucknow Metro before the commencement of commercial operations of its Metro services for the public for the entire section of North-South corridor (phase 1-A). On account of rigorous speed trials, the commercial train services on the priority section were suspended for the entire day from Transport Nagar to Charbagh which were earlier suspended from 6 am to 12 pm only.

The 3-day inspection which began on 20th February 2019 was today completed after thorough testing of all the systems like Signaling & Telecom, Electrical and Civil Structure in addition to safety and passenger-centric systems, lifts, escalators, and other fire emergency-related equipment.

CMRS and his team along with other senior LMRC officials tested the speed efficiency today by running the train to and fro CCS Airport and Munshipulia multiple times. After testing the systems at the maximum operating speed of 87 km/h and conducting several braking tests, the migration testing was completed successfully in the presence of the CMRS and his team. The monitoring of trains at the curves and jerks during the train movement were also tracked during the intensive testing.

Earlier, the CMRS and his team checked the working of Station Control Rooms (SCR) from where the trains will be monitored apart from the Automatic Fare Collection (AFC) system, location of Ticket Operating Machine (TOM) and Ticket Vending Machines (TVM) meant for ticketing and recharging ‘Go Smart’ Metro Cards. The track measurement tests were also carried out along the entire section of the balance section of the North-South corridor (phase 1-A). The ventilation system of the entire Underground section was also inspected and examined apart from other physical aspects pertaining to passenger’s safety, convenience and integrated functioning of different components.

The Public Announcement System (PAS) and Public Information System (PIDS) were also checked in view of their usability in providing information and important messages to commuters. The operation, installation, design and location of lifts, escalators, CCTV surveillance system, Fire detection and alarm system and other public amenities were carefully scrutinized which are not only vital for providing timely assistance to passengers but also strategically important from emergency evacuation point of view.

Kumar Keshav, Managing Director, LMRC congratulated the entire LMRC team, General Consultants and other contractors for their sheer dedication, commitment, hard work and successfully arranging CMRS inspection that was today concluded. This difficult task wouldn’t have been accomplished in record time without the god’s blessings for giving such a unique gift to the Lucknowites in form of the most modern metro. He also emphasized on the fact that nothing is impossible if we remain focused and determined to work towards our goals day and night.