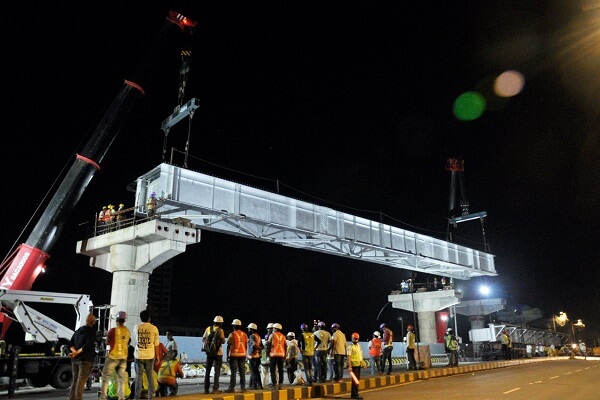 The launching work was started at 12:15 am and ended around 2:30 am on the night of 27th September 2020 and it takes a total of 3.5 hours, according to the officials. These three girders weighing 36 tons each, a total of 72 MT, were launched with the help of two cranes of 500MT and 300MT capacities. These steel girders comprise of three plate girders with a combined weight of 110 MT. The girders were fabricated at a yard in Hyderabad by JKumar Infraprojects. The design and drawings of the launching girders were passed through multiple stages of review and approval for safety reasons.

The MMRDA had made all necessary arrangements for the smooth execution of work and all necessary permissions were taken through e-office from respective authorities. The pipe culverts were made across VH Desai nullah and Avdhoot Nagar nullah, which facilitated the placement of cranes for the launching of the girder. The road was developed using a mixture of fine and coarse aggregates so that no voids are left making it easy to take such heavy loads of crane carrying girders.

We are glad that despite having a lot of difficulties including the incessant rainfall the city witnessed in the past few days, we were able to complete the work. MMRDA is now one step closer to the trial runs. The timely launching of the girder in coordination with Railways and BMC authorities taking all necessary precautions and safety measures also tells how the working patterns in government agencies have changed.

The girders were launched between piers P67 and P68 between Kandarpada Station and Upper Dahisar Station on the northern end of the Mumbai Metro Line 2A. This line is expected to be commissioned in May 2020.

For more details about the project, please explore the Mumbai Metro page of Urban Transport News.