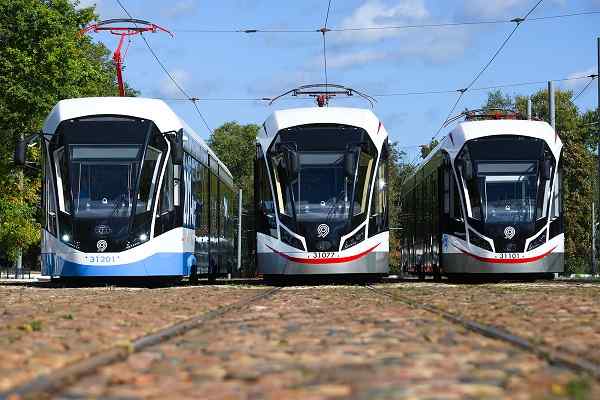 Moscow, Russia (Urban Transport News): Moscow’s Department of Transport reports that all the 40 single-section trams produced by PC Transport Systems have been delivered to the Krasnopresnenskoe depot (responsible for north and north-west of Moscow). The new-generation trams are adapted for passengers with reduced mobility and are equipped with climate control, USB and TYPE-C ports as well as multimedia screens.

We have received 40 new cars ahead of schedule and are putting them in operation almost 3 months earlier than planned. This is a comfortable and modern transport that changes the outdated trams in the north and north-west of Moscow. The new cars are completely low-floor and are convenient for all passengers to enter and exit. In total, we plan to receive more than 100 trams this year, said Deputy Mayor for Transport Maksim Liksutov.

In total, in 2021-2022, Moscow will receive 204 new trams, among them 74 three-section Vityaz-M models, 90 single-section produced by Sinara, as well as 40 single-section trams from PC Transport Systems, which have already arrived in the capital of Russia.

Moreover, Maksim Liksutov commented on the update of the rolling stock of Moscow Metro. Previously, the network has fully renovated it on the Circle Line; the number of new Moskva-2020 trains on Line 6 reached 46, more than half of the line’s rolling stock.

Moscow is a world leader in the rate of renewal of metro rolling stock. The share of new trains has increased since 2010 from 12.6% to 66.1% and will reach 80% in 2023. This will be achieved through the delivery of 4,500 railcars in the period 2010-2023. If we talk about the Line 6 — the fleet here has been updated by 51% with Moskva and Moskva-2020 trains. About 300 more cars will arrive here by the end of 2023, and then the renewal of the fleet here will be completed by 100%. These will be our most modern Moskva-2020 trains and subsequent modifications, said Deputy Mayor for Transport Maksim Liksutov.