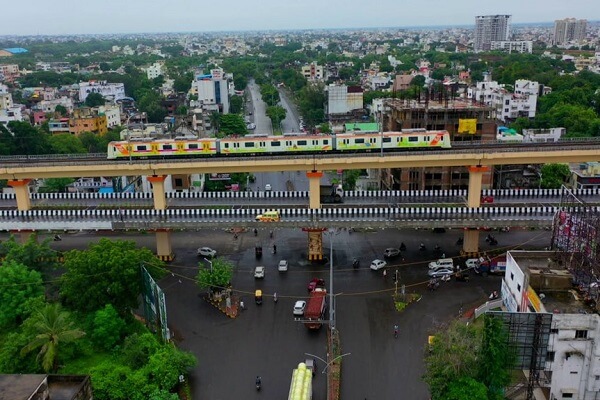 The transportation corridor will feature an existing vehicular and pedestrian underpass at the first level while the railway tracks on top of it form the second level followed by the National Highway and the Metro line on the third and fourth levels, respectively. It is going to be a part of Asia’s longest double-decker viaduct spanning 5.3 km.

The installation of a gigantic 18.9 m wide girder seems to be a first in the history of Indian Railways. The 80 m double-decker steel span has a weight of 1,6650MT while it has been built in a record time of two months by Afcons Infrastructure Limited.

“The double-decker Open Web Girder (OWG), which was created with 1,650MT structural steel with 8,000 structural elements, was placed over the busy Gaddigodam Railway Crossing last winter. All the activities were done in extremely tight railway block hours, given how busy this route is. The span stands at a height of 28M above ground. Such a critical and complex task has never been attempted before in India,” said Arun Kumar, Project Manager, Afcons Infratsruture Ltd.

Apart from this, the remaining routes of Nagpur Metro Phase-1 will also be inaugurated by the Prime Minister on 11th December 2022. The Nagpur Metro routes from Kasturchand Park to Automotive Square (Line-1) and Jhansi Rani Square to Prajapati Nagar (Line-2) will be opened for public. The Phase-1 of Nagpur Metro comprises of 39 km of elevated corridor. Afcons Infrastructure Ltd has also constructed 17.1 KM, which is almost 44 percent of total viaduct length, and around 51 percent of overall civil works.