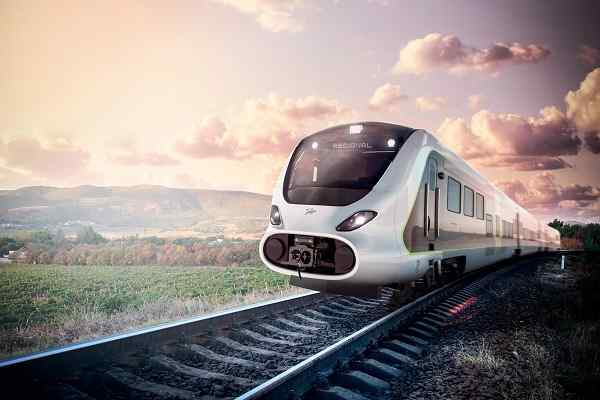 Las Rozas, Spain (Urban Transport News): Repsol and Talgo will jointly develop projects to promote the creation of renewable hydrogen-powered trains and promote emission-free rail transport in the Iberian Peninsula. The agreement, signed on July 19, 2021 at the train manufacturer’s plant in Las Rozas (Madrid) has been signed by Repsol's executive director of Industrial Transformation and Circular Economy, Juan Abascal and the Chairman of Talgo, Carlos Palacio Oriol. In addition, the event was attended by the Chairman of Petronor, Emiliano López Atxurra.

Repsol is the leading producer and consumer of hydrogen in the Iberian Peninsula and operates the largest hydrogen plant of Europe. The company uses this gas as a raw material at its industrial centers which are already evolving to become multi-energy hubs where renewable hydrogen is a strategic pillar in achieving net-zero emissions by 2050. Repsol announced in November 2020, in its Strategic Plan, that it wants to play a leading role in renewable hydrogen, to be at the forefront of the market in the Iberian Peninsula. To do so, it will have an installed capacity of 400 MW by 2025 and will exceed 1.2 GW by 2030.

For its part, Talgo is developing hydrogen-powered trains that will make it possible to de-carbonize railway lines, especially those of the secondary network that are not electrified. To this end, it has developed its Vittal One train, a modular solution for medium-distance and commuter trains powered by hydrogen fuel cells, which will be the first dual hydrogen-electric train. The company is also planning to put on track next November a first train that will allow demonstrating and validating the concept in conditions similar to those of commercial operation.

The alliance between the two companies provides a comprehensive solution to making renewable hydrogen-powered trains a reality. Talgo will handle the design, manufacture, and commissioning of the new self-propelled trains for short and medium distances, while Repsol will offer up its renewable hydrogen generation infrastructure and the Company’s logistical means to supply the railway network.

This collaboration will promote the achievement of one of the objectives set in the Hydrogen Roadmap approved by the Government last October — to have two lines of hydrogen-powered commercial trains by 2030.

The Vittal One renewable hydrogen-powered train uses electric motors that obtain energy thanks to hydrogen cells, which turn this fuel into an electric current. This type of train can run on non-electrified tracks and without the need to install a catenary or make any other type of modifications. As such, it is a mobility solution that doesn’t need long additional developments. It also benefits in particular those regions connected to secondary rail lines that have not yet been electrified, by allowing a quick and easy implementation of decarbonized mobility.

Repsol will use organic waste to generate biogas at its industrial centers, which will be used to produce renewable hydrogen. It has announced the installation of two electrolyzers with a capacity of 100 MW in Cartagena and Petronor that will supply its complexes with renewable hydrogen. In addition, the multi-energy company fosters and promotes large ecosystems across the hydrogen value chain, where supply and demand are adjusted, and technological development, investment, and public-private sector collaboration come together. This type of initiative puts Spain at the forefront of renewable hydrogen production in southern Europe.

These initiatives include the Basque Hydrogen Corridor, launched in February 2021 by Petronor-Repsol and which already brings together 128 companies (Talgo is included among others), the Hydrogen Valley Catalonia, coordinated by the Universitat Rovira i Virgili, Repsol, and Enagás, whose objective is to consolidate an integrated ecosystem in the region around the hydrogen value chain, the renewable hydrogen hub around the Escombreras Valley, in Cartagena; and the Hydrogen cluster of Castilla-La Mancha, with the installation of a renewable hydrogen production plant using photoelectrocatalysis, a technology that Repsol is developing together with its partner Enagás, which will place the Puertollano Industrial Complex at the forefront of the sector.