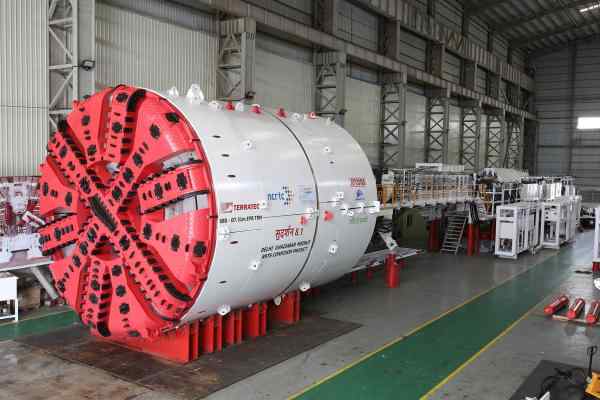 These three TBMs will be used by Afcons Infrastructure Ltd. to complete the 7.12-km tunnelling works for Package-8, Brahampuri down ramp to Begumpul up ramp section of the Delhi-Meerut Regional Rapid Transit System Project. Package 8 consists of a 7.12 km underground tunnel and three underground stations.

Following successful Factory Acceptance Tests at TERRATEC’s facility, the TBMs will now be transported to India. Then the TBMs will be reassembled on-site with the help of TERRATEC field service team. These TBMs named as Sudarshan.

In early 2022, the first two machines will be launched from Bhaisali station where they will pass beneath the densely residential areas and commercial buildings. Then the third TBM, will travel through an extreme right radius towards the Begampul station. The geological conditions along the tunnel alignments will be sand, silt and clay.

For the geological conditions expected, the contractor selected three Ø7.51m EPB Tunnel Boring Machines equipped with Dome-Type CutterHeads. For added versatility, TERRATEC has designed the CutterHead to allow the cutting tools to be exchangeable for 17’’ disc cutters, allowing the TBM to be able to bore through the D-walls and cope with the presence of any unexpected obstacle on its way, such as old wells or foundations.

The Regional Rapid Transit System is different from metro as it caters to passengers who are looking to travel a longer distance with fewer stops and at higher speeds.

The Delhi–Meerut RRTS is an 82.15 km long, under-construction, semi-high speed rail corridor connecting Delhi, Ghaziabad, and Meerut. With a maximum speed of 180 km/h, the distance between Delhi and Meerut will be covered in less than 60 minutes. Operation of Delhi-Ghaziabad-Meerut RRTS Corridor is expected to shift the mode split in favour of public transport from 37% to 63% in the region, which eventually helps in reducing pollution. The entire 82 km long Delhi-Ghaziabad-Meerut RRTS corridor is anticipated to be operational by 2025.