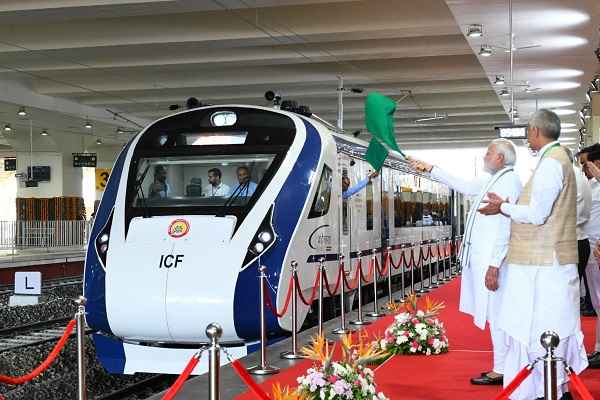 According to the latest information, Prime Minister Narendra Modi will inaugurate the sixth semi-high speed Vande Bharat Express train on the Bilaspur (Chattisgarh)-Nagpur (Maharashtra) route on 11th December 2022.  The new Vande Bharat train will run six days a week and will complete one leg of the journey in about five-and-a-half hours.

This train will be operated by the Southeast Central Railways (SECR) Division of Indian Railways and will have scheduled stops at Raipur, Durg and Gondia.

The seventh Vande Bharat Express train is likely to be launched between Secunderabad and Vijayawada in 2023. This will be the first indigenously-built semi high-speed rail in South Central Railway (SCR) and second such train in south India.

All the coaches of the semi-high-speed Vande Bharat train are equipped with automatic doors, GPS-based audio-visual passenger information system, onboard hotspot Wi-Fi for entertainment purposes, and comfortable seats.

However, the first Vande Bharat Express train of series 1.0 was flagged off on the New Delhi- Kanpur- Allahabad-Varanasi route on February 15, 2019 and second train was launched on New Delhi - Sri Mata Vaishno Devi Katra Route on 3rd October 2019 by Prime Minister Narendra Modi.