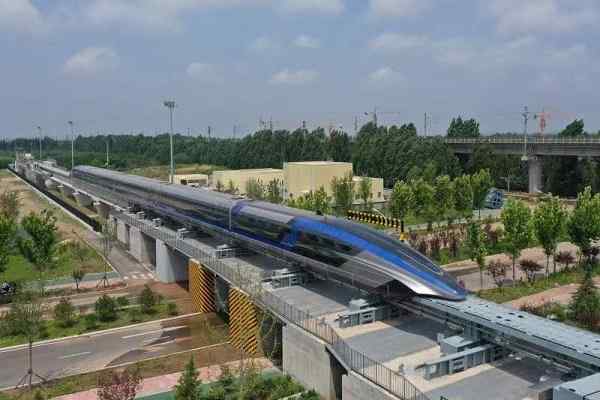 According to Liang Jianying, deputy general manager and chief engineer at CRRC Sifang, the high speed maglev train will be suspended, driven and guided without contact between the train and the track by means of electromagnetic force, with its resistance only coming from the air.

Explaining the characteristics of this new mode of high-speed system, CRRC said that the train is safe, reliable and has low noise pollution, small vibration, large passenger capacity and needs less maintenance, he said, saying that it can fill the speed gap between high-speed rail, whose maximum operating speed is 350 km/h, and aircraft, whose cruising speed is 800 to 900 kmph.

Lu Huapu, director of the Transportation Research Institute of Tsinghua University, said the development of the high-speed transportation system helps realize China's goal of creating "3-hour transportation circles" between major cities, which was put forward in a 2019 plan.

The 600 kmph maglev transportation system will also help consolidate China's leading position in high-speed railway technology, Lu said, adding that China, along with Germany, Japan, the UK, Canada and the US, are the main countries that are engaged in the development of maglev trains. However, the maglev prototype train is about to be rolled off the production line, there is no track line for the 600 km/h high speed maglev train in China yet.

Accoding to sources, some cities are planning to build high-speed maglev lines, and have entered the stage of research and demonstration, including Shanghai-Hangzhou Maglev Line and Chengdu-Chongqing Maglev Line.