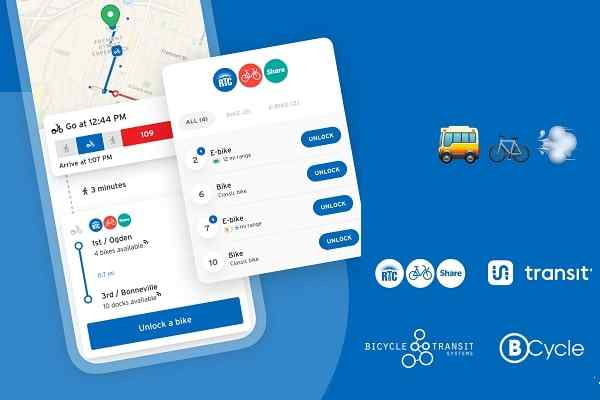 Las Vegas, United States (Urban Transport News): Move over, flying cars: the future of transportation is already here — and it makes “going green” the easy choice. Today, Las Vegas becomes the first city in the United States to integrate its bikeshare and transit systems into a single account and app experience. The new offering, available in the Transit app, enables riders to plan a multimodal trip, purchase a transit pass, and unlock a bike with just a few taps. It’s now available for RTC riders, 1 in 5 of whom already use the Transit app every day.

By merging transit and bike-share into one experience with Transit, the Regional Transportation Commission of Southern Nevada (RTC) is making it easier than ever for people to get around Las Vegas without having to drive. Bikeshare has seen increased popularity during the pandemic, and as the manager of both the bike-share and transit systems, the RTC is positioned to bring the services together, creating a combined option that introduces new audiences to bikeshare.

Nevadans already use Transit for trips on the region’s public transit network, thanks to real-time transit countdowns, bus crowding information, and transit passes in the app. RTC riders have paid for more than 65,000 trips with Transit since the RTC launched ticketing in the app in January 2020. Now, RTC riders can also buy bikeshare passes and unlock bikes with their Transit account for RTC Bike Share's 21-station, 150-bike system.

With just a few taps, users can enter their payment information once to purchase and activate any transit or bikeshare pass type with Transit. Previously, the services were not connected, requiring users to enter payment information into separate accounts and download multiple apps.

The technology behind this first-of-its-type integration in the U.S. is the result of a collaboration led by the RTC between Transit, bikeshare operator Bicycle Transit Systems, and BCycle, which provides bikeshare hardware and technology. It builds upon the existing integration of RTC’s public transit fare products in Transit using the Justride SDK from Masabi, the company that powers mobile ticketing for the agency.

In addition to RTC of Southern Nevada, riders can use their Transit account to purchase fares for more than 30 transit systems across the U.S. and Canada, including AC Transit in the San Francisco Bay Area, RTD in Denver, Big Blue Bus in Santa Monica, Metro in Cincinnati, and the ARTM in Montreal. The app also provides bikeshare payments and unlocking for six systems, including BIXI in Montreal and MoGo in Detroit.

“We are proud to be the first transit agency in the United States to fully integrate both bike share and transit passes in a single app,” said MJ Maynard, RTC Chief Executive Officer. “Providing this additional multimodal option is just another way we are meeting our community’s evolving transportation needs.”

“This collaboration is the result of a public transit agency deciding to forge a new path for the future of transportation,” said Jake Sion, Chief Operating Officer at Transit. “Nevadans are getting mobility at the press of a button in Transit. What happened in Vegas shouldn't stay there: we’re already cooking up plans with our public transit partners across the country to integrate bikeshare, scooters, and on-demand services into their own transit networks."

“Our goal is to change the world by getting more people on bikes,” said Morgan Ramaker, Executive Director of BCycle. “To do that, we’re working to remove barriers to riding. This collaboration will make it easier than ever for Transit riders to add bikes to their options for alternative transportation.”

“While there has been much talk around the potential of MaaS, cities like Las Vegas are already deploying highly innovative mobility solutions that give quick and simple access to a range of modes,” said Brian Zanghi, CEO of Masabi. “We are delighted to see solutions supported by Justride being developed to enhance the discoverability and usability of bikeshare schemes, which will have a positive impact on health, the community, and the environment.”