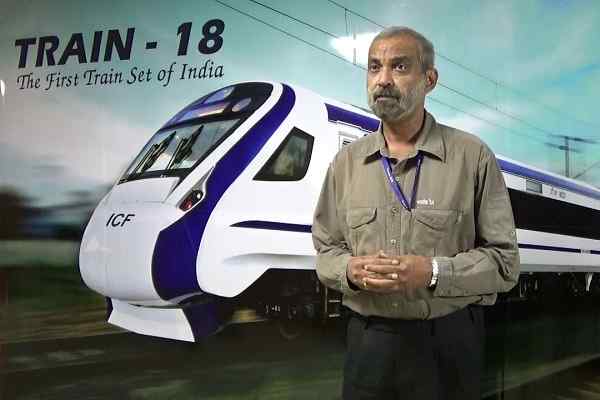 Meet Sudhanshu Mani, a retired but not tired IRSME Officer from the Integral Coach Factory (ICF), Chennai, Indian Railways who is known as an innovator of Train-18 (Vande Bharat Express). Train-18 is India’s first indigenous semi high-speed train which proves country’s capabilities to make it self-reliant under Atmanirbhar Bharat Mission. Mani has recently written a book titled “My Train-18 Story” based on his experience and he talked with Urban Transport News about the journey of Train-18 from from conception to design to engineering to manufacture and roll-out for the service of the nation.

A team of ICF (Integral Coach Factory) manufactured Train 18 in 2018, India’s first semi-high-speed train set, which is now in service as the much-talked about Vande Bharat Express. This team had put together, from conception to design to engineering to manufacture and roll-out, a modern train set in a record time of 18 months, against the world-standard of a minimum of 36 months from the drawing board to prototype on line. The train was built at nearly one third of the estimated price for import of an equivalent train. I was the fortunate one to have led this team right through the extraordinary 18 months and some months before and after. This book is my tribute to this team. And of course, the pleasure of recounting those heady days was a bonus.

Please tell us something about the Train 18, its speciality and its features? What was the motive behind launch of this train?

A modern train set was a long time coming. India needed a modern train set for decades but IR bureaucracy had repeatedly let the country down, immersed as it was in internecine battles and venal intentions to import. The capability and the chutzpah to take up a project of new train design and manufacture de novo existed among the ICF railwaymen. The support industries in India had also reached near world-standard in certain key areas and was waiting a friendly nudge to excel themselves. All it needed was to channelize this energy to bring something noteworthy to fruition. I was posted in 2016 at ICF as General Manager, in all likelihood on my last assignment before superannuation, after completing near life-long service of 35 years as a railway officer, including a rare stint in Germany in the Embassy of India as the Minister (Railways). I had always dreamt of India designing and manufacturing a modern and fast train with pleasing interiors and exteriors. Once at ICF, I had the dream, the vision, the opportunity and as time would tell me, the good fortune to realize my dream.

As you are one of the key architects of this mission, how do you feel after the success of Train 18? What challenges have you faced during the whole journey?

I naturally feel very good that I was afforded this great canvas at ICF to be able to give to the country something it long deserved. It is also a message to young aspirational India that we in India can do it. The challenges included technical and managerial/administrative. While the technical challenges were handled well by the entire team. The managerial challenges included managing the contradictions at Railway Board, supply chain, close interaction with industry, adherence to very tight time lines and so on.

Government of India has recently launched Atmanirbhar Bharat initiative. What do you think about the initiative?

The Make In India and Atmanirbhar Bharat Abhiyan are schemes whose purpose appears to be to boost manufacturing in India.  The underlying idea is to replicate some successful sectors to make India a factory of the world, riding on R& D carried out by developed countries. We have seen some successes but nothing very significant. But the spirit of Atmanirbhar Bharat should be in innovation and creation of technology first and foremost.

In spite of our size and talent pool, we have remained an importer of technology. A country which can make Mangalyaan in an environment of technology-denial, at one tenth the cost of Antilia, the Ambani abode, has no home-grown products or technologies to show for! This is obviously a result of our cockeyed focus over the decades by successive governments. But the onus now lies squarely on this government to change course and do it fast.

Government because private sector can invest in meaningful R&D but not in these Pandemic times when bottom lines are strained. But governments are big spenders. Our governments will not be able to do any meaningful R&D solely on their own, fettered as they are with bureaucratic straitjackets, barring exceptions like ISRO. So, the best bet is for the government to engage our industry with a caveat to do majority design and development work in India and source from wherever they wish. Our obsession with level playing field in Public Procurement is actually favouring multi-nationals and their products as the eligibility criterion stipulated in projects tend to exclude capable Indian companies which lack experience.

So, the focus of Atmanibhar Bharat must change. We need a playing field which is skewed for the benefit of proficient local industry willing to design and create such that IPR would rest with India. The path to continued indigenous improvements in products and technology would then open. A million designs and projects are burgeoning in the minds and hearts of an aspirational India. All they need is a leadership with sense of purpose and resolve to make India truly Atmanirbhar.

The Train 18 is an initiative which is indigenous to India? How do you think it has contributed to the Make in India initiative?

As I told you, Train 18 finally became a reality in October 2018, a fruit of success, realized after an intense journey of 18 heady months, all by us, Indians. It was a mere train but it was welcomed with unprecedented excitement and kudos not just by railwaymen and rail enthusiasts but by the public at large. Why? Because it worked like a stimulator, an exemplar, an icon for the restless minds of the nation, both young and old, to try and replicate similar projects. Something like, if ICF can do it, why can we not?

What are the different aspects which you discuss about in your book? Please share in brief?

The book is not about me, it is about the team. It starts with the embryo I had in my mind, my posting at ICF, my attempts to evaluate ICF and plunging headlong into the project  with a very able and excited team. Hard work and travails, a hitch here and a roadblock there. Problems galore but solution soon, with great synergy. The team worked like men possessed, not only the ICF team but also all the partner companies. These companies saw in this project the pride of nation building, not business alone.  How Train 18 had lived up to its name twice over, not only was it turned out in 2018 itself but the project took exactly 18 months from drawing board to prototype turn out. The proudest moment ever for ICF. What I have recounted is history in the making, with the help of many anecdotes from my working life in railways and yes, with apt quotes from my poet uncles like Shakespeare and Ghalib.

How do you take your association with Indian Railways and government of India?

I have worked all my life for Indian Railways and even today, as a consultant for the industry I am a remote stake-holder. I had my share of happiness, disappointments, action and inaction. I have sung paeans to it many times and I have complained bitterly at times. But at the end of the day, I have no doubt in saying that I loved every moment of my life with Indian Railways.

What are your future plans? How do you want to contribute to the future of India?

I am very happy being a consultant, it pays well but I am happier doing other things which do not pay at all. Like playing the role of a motivational speaker in gatherings of young and old, writing, anchoring programmes on Youtube on current affairs and literature, promoting visual arts and so on. I will not say that I have any role in future of India but yes, as Shakespeare said, “things won are done, joy’s soul lies in the doing”, I am engaged with things which give me joy.

That’s simple. Read the book not for its prose, lessons or stories. Treat it as an experience and be a part of it temporarily. You will love it reading it just I loved reliving it and writing it. It is, hopefully, not some mundane mumbo-jumbo of a technocrat or a dreary report of an engineer. It’s about multiple hues of a dream and how one can actually live the dream.