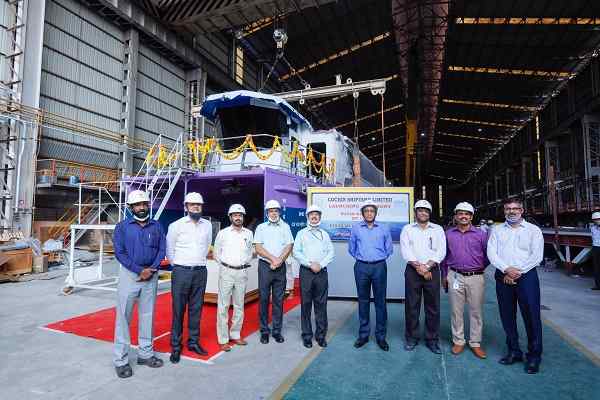 This boat was the first of the 23 boats being built by Cochin Shipyard Ltd (CSL) against the order given by KMRL. The boat can accommodate 100 passengers at a time. The underwater works of the boat have been completed, and the remaining work is progressing fast, a statement from KMRL said.

The first boat will be commissioned after the successful completion of its basin trial and sea trial by the CSL. Construction of the remaining 22 boats are underway at Cochin Shipyard.

In February, Kerala Chief Minister Pinarayi Vijayan inaugurated the first route of Kochi Water Metro from Vyttila to Kakkanad. The Kochi Water Metro system will comprise 38 stations in 15 routes, covering a distance of 78.6 kilometers. The boats will be fully air-conditioned and will use green energy and that they will not be dependent on fossil fuels.

"The tender procedures for the construction of terminals at Bolgatty, Fort Kochi, Mattancherry, Cheranalloor, South Chittoor, Mulavukad North and Ernakulam Ferry are also complete. The terminals are constructed in such a way that their boat jetties will float on the water surface for hassle-free anchoring during low and high tides without a difference," said sources from KMRL.

In the second phase of Kochi Water Metro project, KMRL will procure 55 more boats with 50 passenger capacity. Each boat will be able to accommodate up to three wheelchairs to facilitate persons with disabilities.

The total estimated cost of the Kochi Water Metro project is Rs 747 crores and this project is being funded by the German funding agency KfW.