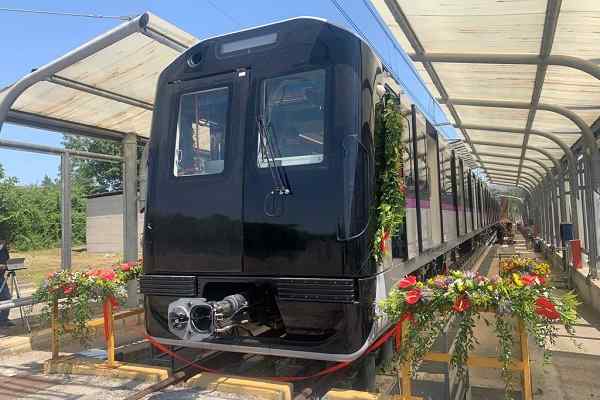 Pune, India (Urban Transport News): Titagarh Firema S.p.A., an Italian subsidiary of Titagarh Wagons Limited, announced that the company has dispatched the first train set to Maharashtra Metro Rail Corporation (Maha Metro) for the Pune Metro Rail project on August 2, 2021, from their Metro Coach Facility in Caserta, Italy. The coaches are expected to arrive in Pune by September 2021.

"Titagarh is honored and proud to flag off the first train set for Pune Metro from our plant in Caserta, Italy. The virtual flag-off ceremony was conducted on the 30th of July in the august presence of Neena Malhotra, Ambassador of India to Italy; Vincenzo de Luca, Ambassador of Italy to India, and several Maha Metro officials," said the company.

"Happy to learn that first train sets manufactured for Pune Project of MahaMetro by Titagarh Firema SpA Plant in Italy were flagged off for shipment today. They are scheduled to arrive in Pune in September 2021," said Durga Shankar Mishra, Secretary, Ministry of Housing and Urban Affairs (MoHUA).

In August 2019, Maha Metro had placed an order worth Rs 1,125 crores to Titagarh Firema for Design, Manufacture, Supply, Testing, Commissioning Of Passenger Rolling Stock (Electrical Multiple Units) and Training Of Personnel' for Pune Metro Rail Project. The company has to supply a total of 102 coaches (34 metro train sets) for Pune Metro under this contract. Out of first train set now rolled out from their Italy plant.

Initially trains in Pune Metro will be of 3 coaches which will be subsequently converted into 6 coaches as per traffic requirement. These coaches will be fully air-conditioned with humidity control provided with the digital route and station display and interiors of international standards.

They will have 100% CCTV coverage. Will have an emergency/panic button to ensure the safety of the passengers. Passengers will be able to speak to Train Operator on board as well as to Emergency Control at OCC if required. Physically challenged passengers can travel seamlessly to/ from the station entrance to the train with specially earmarked places for wheelchairs. Mobile and laptop charging facilities will also be provided onboard.

Coaches will be ergonomically and aerodynamically designed with the coach exterior to reflect, history culture heritage of Pune and Pimpri Chinchwad areas. Coaches will be fit for the maximum speed of 95 Kmph and will have the capacity to accommodate over 925 passengers. They are energy efficient and will be equipped with a regenerative braking system. They will also be capable of operations in driverless mode, however, Pune Metro's operations will be with drivers/operators", said in the statement issued by Maha Metro.