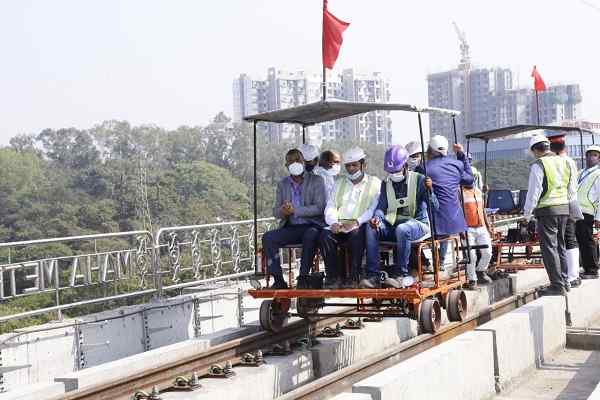 During his inspection he carried out inspection of all 5 metro stations of priority corridors namely Phugewadi, Kasarwadi, Bhosari, Sant Tukaram, and PCMC including all the passenger amenities provided by the Maharashtra Metro Rail Corporation Ltd. (Maha Metro).

The CMRS team conducted confirmatory train testing on entire 7-km section by metro train in both the direction and turn back arrangements for train at PCMC and Phugewadi. The team inspected elevated viaduct and Conducted NDT (Non-Destructive Testing) to check quality of concrete, steel girders with regards to codal provision.

The team also conducted intensive quality audit of Maha-Metro works of all the departments. They carried inspection of overhead maintenance facility for coaches at PCMC end at sunken pit. CMRS accompanied trial run and testing of newly arrived coaches from Hill View Car Depot at Vanaz to Garware. These trainsets are undergoing intensive trial testing before their induction into regular services.

All the testing has been successful and CMRS expressed his satisfaction and appreciated quality of work by Maha-Metro. Authorization of CMRS for PS1 section of Maha-Metro is expected shortly.