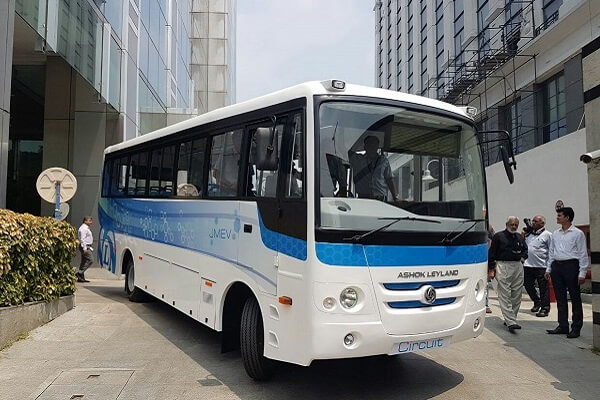 Nashik, India (Urban Transport News): Former Chief Minister of Maharashtra, Devendra Fadnavis has flagged off the 50 City Bus Services in Nashik on July 10, 2021. This is part of introduction of a total of 150 City Bus services for public by Nashik Municipal Corporation (NMC). These buses will be operated by TravelTime, a transport solution company based out of Pune, India.

Addressing the press confrence after launching the bus service, Fadnavis said, “Maha-Metro had invented the eco-freindly hybrid Metro Neo model which was first planned for Nashik city. Now central government has accepted it at the national level. Now Prime Minister Narendra Modi is planning to execute it in his Lok Sabha constituency Varanasi. If PMC executes Metro Neo it will get financial aid from central and state governments. It will help to bring down civic body’s financial burden.”

“Maha-Metro had invented the model, so it is better to ask then to prepare the Detailed Project Report (DPR) and allot the work to them as there would be no need to carry the tender process,” he added.

Nashik Municipal Corporation has selected TravelTime and awarded the 12-years contract through Competitive Bidding Process. A total of 150 buses will be deployed with an estimated contract value of about Rs. 1,000 Crore.

The contracts are based on Gross Cost basis (GCC model) with revenue risks being borne by NMC; TravelTime shall be paid based on the km-run; minimum assured km per day by NMC has been provided for in the contract. The Contract has a defined price escalation mechanism to take care of increase in fuel, manpower cost etc. A total of 150 non-AC CNG / Diesel buses will be deployed for a contract period of 12 years.

The bus has various features like automatic doors, CCTV cameras, Public Address Systems (PAS) amongst others. Provisions like direct messaging from Bus Drivers, panic buttons for emergencies are also part of the bus.

TravelTime has tied up with Ashok Leyland, the largest Heavy Motor Vehicle (HMV) manufacturer for supply of buses. The Company has also achieved the financial closure for the project.

With Nashik City Bus Service in operation, TravelTime is now operating at 8 cities across India including Gurugram (Gurgaon), Ahmedabad, Pune, Nagpur, Indore & Bhubaneswar with total number of Buses in operation reaching about 900.

The Company has own contracts in Pune and Indore; the services will be launched soon. TRAVELTIME has emerged as top Bus Operator in City Bus segment; it has varied segments under operation which includes CNG and Diesel buses. The Company has been successfully overcome the COVID19 impact with no default to any lenders or creditor and major impact on its operating capabilities.

The Company has robust plan to venture further into green bus operation, E-buses and CNG in near future. In the next 2 years, about 5,000 CNG buses and 3,000 E-Buses are expected to be put to operation by various authorities across cities in India. This is line with various government policies such as National Electric Mobility Mission Plan (NEMMP), Faster Adoption and Manufacturing of Electric Vehicles (FAME), etc., instituted by the Central Government to promote the adoption of the EV technology.